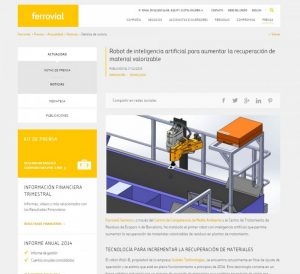 Ferrovial Services has published through its website the recent installation of a Sadako’s Wall-B in one of the urban waste treatment plants managed by the Group, the Ecoparc4 located in Hostalets de Pierola (Barcelona). The article titled “An artificial intelligence robot to improve collection of recoverable material“, explains the new technology and how the equipment is currently
END_OF_DOCUMENT_TOKEN_TO_BE_REPLACED

The prize has been received by Sadako CEO Eugenio Garnica in the Award Ceremony celebrated on November 5th in Madrid, with the assistance of the General Secretary of Environment of  the Spanish Agriculture, Food and Environment Ministery. It supposes a monetary reward of 6.000€ (very welcome!) and much beyond that, the acknowledgment of Ecoembes, one
END_OF_DOCUMENT_TOKEN_TO_BE_REPLACED 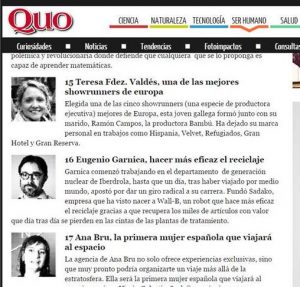 Eugenio Garnica, CEO of Sadako Technologies, among the ” 101 innovative minds of Spain ” by magazine Quo

The magazine Quo is reaching the age of 20 years and wants to celebrate with the best. Their managers have toured Spain in search of the men and women who have broken new ground in 2015. Our founder and CEO Eugenio Garnica is including in the list of ” 101 innovative minds of Spain” published by
END_OF_DOCUMENT_TOKEN_TO_BE_REPLACED 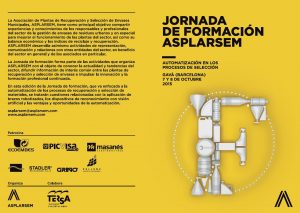 The Technical Workshop about Automatization organized by ASPLARSEM (Spanish Association of selection and recovery of municipal waste containers) took place on 7 and 8 October 2015, in the Auditorium of the Centre of Tractament of Residus Municipals Gavà-Viladecans. As part of this conference, the CEO of Sadako Eugenio Garnica gave a presentation about Wall-B, our municipal
END_OF_DOCUMENT_TOKEN_TO_BE_REPLACED 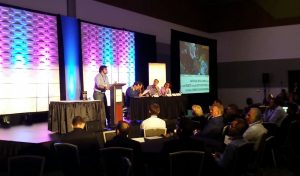 Our CEO Eugenio Garnica had the honour to pitch in front of a prestigious jury and more than 300 people in the RoboBusiness Pitchfire contest, where on last Septmber, the 23rd, 15 startups from all around the World have had the opportunity to showcase their innovations in the heart of Silicon Valley. Despite not winning
END_OF_DOCUMENT_TOKEN_TO_BE_REPLACED