We are greatly glad to announce that Sadako Technologies is the winner of the Early Stage Challenge organized by Nvidia during its GPU Technology Conference 2016.

An impressive judge panel was deciding in this tough competition. Following a two-hour high-tech shootout with a dozen fledgling startups, Sadako’s CEO Eugenio Garnica 4 minutes pitch in front of them, presenting our GPU-powered robot that differentiates types of trash for recycling, come to emerge on top and so he was proudly receiving the check for $100k.

Sadako is very thrilled about the recognition this prize supposes and also joyful about the cash injection it brings to our startup :- )

We would like to thank Nvidia for this huge prize, and commit we’ll do our best with these funds to boost AI advances and keep on generating “Technology for a Better World”. 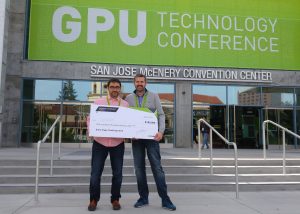 The Early Stage Challenge is one of the events of the Emerging Companies Summit, hold Wednesday, April 6, as part of the annual GPU Technology Conference taking place at the San Jose Convention Center in Silicon Valley from April 4-7, 2016. The summit provides emerging companies with an opportunity to present their technologies to potential investors, industry executives, customers, analysts and media.

Nvidia is the world leader in visual computing. The GPU, its invention, serves as the visual cortex of modern computers and opens up new universes to explore, enabling amazing creativity and discovery, and powering what were once science fiction inventions like artificial intelligence or autonomous cars. GPUs are key part of Sadako’s AI developments that allow our robotic sorter Wall-B “see” valuable waste.